The Power of Role: Why RACI Matters 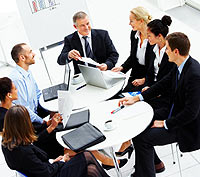 Most of us know how exciting it can be to work on a “high performance” team where everything is “clicking” and the group is doing good work—whether that team is at work, on the playing field, in one of our children’s schools, or even in our neighborhood. Being part of that kind of team is a joy. Unfortunately, most of us also know what it’s like to be part of a group that is struggling: people stop coming to meetings, no one is clear about what to do, or there is too much conflict on the team. These experiences are frustrating and depleting and all too common.

One of the key differences between these two experiences has to do with a largely invisible aspect of our life in groups—roles. Most of us don’t think about our own roles much but we inhabit them almost like a costume we put on over our individual personalities. They are pretty powerful and behind the scenes, they drive a lot of the action and most of the conflict between people and between teams.

I’ve been a member of a high performance team in one of my client organizations lately. Everyone is working hard and making a contribution to the whole. We have a lot to do and our deadline is approaching fast, but the meetings feel productive and organized. We move from person to person, each one knows what they are responsible for and what to do next. Sometimes I intervene to make it clear who has to approve something (after all, I’m a consultant who specializes in clarifying roles in a system!) but for the most part, this group has “figured it out.” You can tell it’s working because people are joking and enjoying themselves and feeling proud of the team’s work. Sure, there’s anxiety about how much still needs to be done, but you can feel a kind of happy anticipation for the coming project “launch.” Why is this team working so well? They have figured out each of their respective roles as well as the role of the group. Often a leader has helped them to get this right, but sometimes they have worked it through on their own. Once the roles are clear, people understand what they can and cannot do—it unleashes their energy for work. Once roles are clear, people can even start to have fun.

Why haven’t these less functional groups “figured it out” as they’ve gone along their project way? Probably because raising these issues feels pretty delicate, pretty threatening. When was the last time you felt comfortable confronting someone about how much they were contributing to a project? Or asking the project team leader whether they have any real authority? Or asking someone from another department why they thought they knew more than you do about a topic? Not lately, I’ll bet, and with good reason. These kinds of conversations feel risky and we don’t want to blow up our professional relationships or get ourselves labeled as a troublemaker.

This is why the RACI tool, in all its wonderful simplicity, is so helpful. The RACI language is so NEUTRAL. You can say, “Do you have the R for this or do I?” without getting into the sub-text (I’m doing all the work around here, you turkey burger!) You can ask, “Who has the A to approve this plan?” without implying that the leader of the project is a cipher. At the end of the day, RACI is just a language—much easier to learn and use than pig-latin, that helps us to have conversations about role. Even in really complex environments where there are genuine disagreements about who should be doing what, who has what degree of corporate power, which department should “own” what decisions—RACI can get us started on a negotiation with one another in a clear, non-threatening way.

Those negotiations may take some time, even with the RACI tool at your fingertips, but it’s worth the investment. Without that up front work of “figuring it out” you may be left with a group that is lifeless and/or tense.  Working with a group like that will feel like you’re driving a car in the wrong gear. You may get where you want to go, but it will be painful. But if you get the roles clarified and the leadership of the group straightened out, you will free everyone to get on with the work. You’ll get into gear and really fly along. And, that’s when the fun begins.